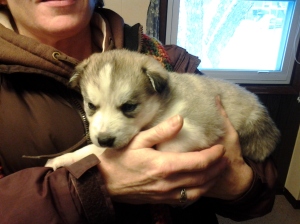 These days I wake at 6 a.m., specifically to take my dog Sophie for a walk. There are two reasons for going this early; summer heat and Sophie’s intense dislike of other dogs. She had this lovely trait passed down to her by her mother, a full blood Malamute. Her father, a full blood Husky gave her unbounded energy and a curiosity of nearly everything. Together these things make her a formidable dog. She’s beautiful, with streaks of gray, black, and white and Sable around her ears and nearly white eyes. At 115 pounds with her outgoing personality she scares most people who don’t know her. I’ve never been able to teach her not to jump up to look you in the eyes. Mostly, when she does that it’s to smell your breath to see if you’ve eaten anything good recently. Her appetite matches her energy.

This morning we head West and cross Highway 3, two blocks from our house. Traffic is not a problem at this time of day, only a car or two to watch out for. In another half hour, it’ll be rush minute in our rural town. We live in Northfield, Minnesota, a town of about 20,000 people 40 miles south of the Twin Cities. Northfield’s claims to fame are the ending of the career of The Jesse James gang, and Carleton and St. Olaf colleges. We moved here two years ago when we bought my mom’s house, the very house I grew up in. Since that time my mom and my wife have both died, and now it’s just me and Sophie. Just when you think you know what you’re doing, life has a way of telling you you’re wrong. Onward and upward, they say.

Sophie and I head for the path that runs between the dog park and the Cannon river. We walk different paths nearly every day so Sophie has new things to sniff at and the scenery change keeps us both interested. The river has been high all summer. We’ve had copious amounts of rain this year and the trees and foliage along the river is lush and green. Various wildflowers poke their heads up here and there and wildlife is abundant. There are plenty of cottontail rabbits and squirrels to keep Sophie interested. If they get too close she lunges, jerking my arm and shoulder with her sled pulling power. At 7 1/2 years old she’s lost none of her youthful exuberance. Me, on the other hand, at 62, I wonder how much longer I can hold her back. We cross the river on the walk bridge and I notice the water level has come down some. The part of the path that has been flooded for much of the summer is visible again, now covered in mud. We head past the Kwik Trip and Walgreens and cross Highway 19. Crossing Highway 3 again, we walk along Ames park. The park is where the carnival for the Defeat of Jesse James Days sets up. The rest of the year it’s empty. Inhabited by Canada geese whose crap is everywhere, it’s not a popular park. The geese, more wary than ducks start running for the river the moment they see us. If dogs can smile, then Sophie is smiling, thinking she’s successfully run off all the geese. Another job well done.

Ducks on the other hand, are not so easily scared away as the geese are. We have several Mallard families living along the river and some days they barely get out of Sophie,s reach. Then they quack indignantly as if to say, this is our park buddy, leave us be! Among the Mallards there are at least 3 pure white ones. The internet tells me this is the result of wild Mallards breeding with domestic ducks. Another page said that most domestic ducks are Mallards, bred for certain traits, like the plain white color so these could be escapees. Who knows. With the considerable rainfall we’ve had this summer part of Riverside park has become a wetland. There has been permanent water in a large swath of it and the city has not mowed it. The ducks love it and this is another park that doesn’t see much use. I’m all in favor of the wetland, I hope it stays.

This morning we walk past Ames mill. Construction on the mill began in 1856 and was owned by John W. North, the founder of Northfield. In 1917 the Campbell’s cereal company bought the mill and the company wanted to make a hot breakfast cereal that would be different from the cream of wheat and farina cereals of the day. Adding Malt to wheat cereal produced Malt O Meal and the Ames mill in Northfield is the only place in the entire world where hot Malt O Meal cereal is made. Another claim to fame. The Malt O Meal company produces some of the most wonderful smells in the air. It reminds you of the smells of baking cookies or breads. When they’re making chocolate cereal, it’s even better. Crossing the river at Bridge square, we take a break on a park bench. On Bridge Square is a large fountain donated in part by the Sheldahl company, another Northfield claim to fame. Sheldahl, originally spelled Schjeldahl, the founders last name, has made aerospace products including material for the Apollo lunar landers and the Space Shuttle program as well as early satellites and many military applications.

Leaving Bridge Square we head down Water street just in time to see a fat Raccoon waddle up the street. Seeing us, it heads for a clump of thick bushes and stays there. Sophie will chase any animal that runs and they all run. There is a leash ordinance in Northfield and I’m a strict follower. I wish everyone felt that way. One evening Sophie and I were sitting on the deck enjoying the evening air when a family came walking with their dog. The dog was not on a leash. It charged into our yard right at Sophie who was on her cable. Sophie wasn’t having any of that and proceeded to tear up the dog pretty good. The next day a policeman stopped to ask for my version of the story. Apparently the family had to take their dog to the vet for stitches. I felt badly for the dog but my dog was tied up so we didn’t get into any trouble. Hopefully they will use a leash from now on. 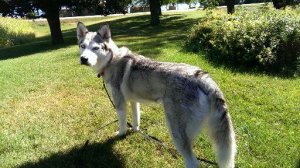 We work our way back through the park and finally arrive at home. Before we moved here we lived on a lake near Faribault, a town about 12 miles away. My wife worked overnights and I would be dressed in my scrubs and ready for work when she came home. She felt safer with a big dog in the house while she slept. Ann would play really rough with Sophie, who loved it, growling and barking and rolling around. She misses that, I’m sure. After a big drink and some breakfast, Sophie settles down for a nap and I head to the computer for some writing. My being retired now, Sophie gets all the attention she needs. As I write this the heat of the day is rising. The temperature will approach 90 degrees today with the dewpoint at about 70, which is considered tropical. Today, we’ll stay inside.

Life moves in strange circles. Everything changes. In the 7 1/2 years that I’ve had Sophie, there have only been a handful of times that we’ve missed our morning walk. And yet each time we go something is always different. Trees, grass, shrubs, and wildlife are always there. We pass the occasional jogger or bicycler. Sometimes there’s a beaver along the river or like this morning, a raccoon. Ducks and Geese all summer and rain or snow in Winter. I enjoy our walks as much as she does, for the solitude and the scenery. Birds of various kinds, including eagles and hawks are sometimes seen and all these are indicators that our environment, at least for now, is still in good shape. We’ll keep walking for as long as we can and eventually, that will change. As with the seasons, lives change too. We will take it as it comes and adapt, for what other choice do we have?