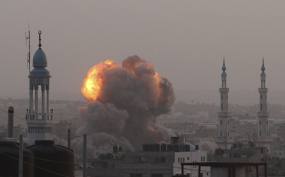 Some of you may notice I’m writing a lot this weekend. My wife is working all weekend and I have nothing to intrude on my time so yeah, I’m writing a lot. I haven’t had much time this summer as there has been quite a bit going on that I won’t go into. The tragedy in Gaza has been on my mind lately so I thought I’d write about that in conjunction with my Unitarian Universalist faith.

I became a UU about three or four years ago. I was raised in a very loosely Christian family. We were taught to say our prayers as children, went to a non denominational church on Sundays, had Wednesday school and that was about it. I tried to believe in the Bible but found it raised too many questions that were just unanswerable. My wife was raised Catholic. ‘Nuff said. I found that Unitarian Universalism’s seven principles fit very well in my life. Try this link to learn more. So why am I bringing this up? Because of the First Principle. It’s a tough one, and it goes like this: Unitarian Universalism recognizes the dignity and worth of every person.

If you think about this you can begin to see the dilemma. EVERY PERSON. This means from the murderer to the saint. Every person has worth and dignity. Now if you’re human like I am then you know people you don’t like. We all do. There are some people we don’t like a lot. Do they still have worth and dignity? According the the UU first principle, yes they do. But to afford them the worth and dignity we UU’s say they have, we really have to think about them. I know a woman that I come into contact with often that I just don’t like. Her world views are the polar opposite of mine. Politics, religion, child rearing, work, everything. Everything I believe is true or valuable, she believes the opposite. We have had many frustrating conversations that have finally ended with me just keeping my mouth shut for fear of going to far.

So how does this person have worth and dignity in my eyes? I have to really think about it. She is married and has children. Listening to her talk about her family, I know that she loves them and they love her. Because of this I assume she is a good mother and a happy wife. She has friends. She has hobbies. She has a social life. People like her. For all those reasons, she has worth and dignity. That’s how I have to see it. The first principle does not say I have to love all people or even like them. It says they have worth and dignity and we as humans need to recognize this when we deal with others. We need to treat everyone as people of worth and dignity.

So now to the Palestinian crisis. In case you don’t know, Israel is bombing the hell out of Gaza, right now at this very moment. If you look further down on my recent posts you will find a reblog from a lady whose website is titled “Why Gaza?” You can read there for more info. So how about Benjamin Netanyahu? He is the current Prime Minister of Israel. He is the one behind all the bombing. Does he have worth and dignity as a human being? If you go by the UU first principle then yes, he does. For the same reasons that the woman I described does. I’m not sure however that there are many Palestinians who would agree with me. I follow a few of them on Twitter and they have a few choice words to say about him and Israel as they fear for their lives right now. And I can’t blame them nor would I try to talk them out of their views.

However I have to look at it like this. Even my enemies have worth as human beings and should be afforded dignity because of that. Thinking of people as less than human is the main reason this country had slavery. It is the reason Native Americans were slaughtered and hunted for bounty. It is the reason Israel bombs Gaza. I believe that it’s wrong to think of anyone as less than human and therefore they have worth. Even if they are enemies. Now saying that, I am not having bombs dropped on my house or having my children killed in front of me. I understand Gaza’s grief. I understand their hatred. I might feel the same were I in their situation. I can only hope that their hatred (if they feel it) will turn and things will improve. I pray that the world leaders will finally say, enough is enough, and as this crisis continues I need to keep the first principle in mind, always.